“And to the angel of the church in Smyrna write,
“These things says the First and the Last, who was dead and came to life.”

It’s with good reason that the Lord starts each letter with a reference to Himself.  Especially in this day of mega-churches and “personalities” (“Chrislebrities,” ugh! what a terrible word!), Jesus seems almost irrelevant.  Of course we believe in Him – we are Christians, after all – but with all the programs and projects and politics and all our efforts for the betterment of mankind, He kind of gets put on the back burner until something goes wrong, and then we run to Him, wondering why He doesn’t do something.  (Although, in this day of fast foods and microwaves, I wonder how many people know what a “back burner” is.  Anyway.)  If Christ were indeed to go away, how many churches would notice the difference?

I don’t mean to be critical, though I am, but without the Lord Jesus, there is no reason for “church.”  There is no salvation.  There is nothing.

Our Lord is simply reminding each church of that fact.  After all,

Several cities in the Roman Empire claimed the title, “First (of something).”  There were several different categories for this.  Ephesus, Smyrna and Thyatira were among these cities.

I think the Lord was simply reminding them that long before Smyrna had been thought of, He could say, “I AM”, and long after the last ember of this planet has burned out, cf. 2 Peter 3:10, He will still be able to say, “I AM”.

We forget that.  Like Smyrna, there are places of incredible beauty and awe-inspiring scenery in this world.  Some of you have traveled all over it.  I’ve just seen a little of this country.  The vastness of the Pacific and Atlantic oceans, the Gulf of Mexico, fall colors in the Ozarks, the majestic beauty of the Rocky Mountains and Pikes Peak (the mountain in the header of this blog), the impressive vista of the Black Hills of South Dakota, the awesome feeling of the world’s highest suspension bridge holding sway 1000+ feet over the Royal Gorge and the Arkansas River.

And it does sway (move). 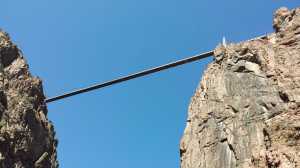 You used to be able to drive over the bridge, but that’s long gone.  Cars got too big and heavy.

It’s enough to walk over it.

As an aside possibly only of interest to me, my grandfather worked in the steel mill in Pueblo CO where the steel cables were made that support the bridge.

With all that, there’s a great deal of beauty in this country that I haven’t seen.

One day, it’ll all be gone.

The Lord Jesus will still be the First and the Last.

But He also is the One –

– “Who was dead and came to life.”  The Greek reads, “Who became dead and lived.”

It’s a study in itself just to consider the Lord’s “becoming.”  That’s why we split this letter into two parts.

The thing about this is, who was He before He became flesh, before He was born to the virgin in Bethlehem?  Everything rides on the answer to that question.

If, as some who knock on your door insist, He was just another created being, albeit maybe a little higher than you or me, if that’s true, then there’s no hope for any of us.  As and if only a creature like us, He would be completely responsible to God for Himself.  He would have to be perfection Himself in order not to be condemned.  His life would have value in this way only for Himself.  He would have nothing left over, as it were, for anyone else, or you or me.  We’d be doomed.

But John 1:1 says that before He became flesh, He was God.  Those same folks who knock at your door insist that John meant that Jesus was only “a god.”  It is true that in the original, there is no article, no “the,” before “God” in John 1:1.  If there were, then the Word would be the God, and the “oneness” folks are right.  But there is no article before the word, “God.”  In the Greek, there is no indefinite article, no “a,” and thus no way for John to write “a god.”

The difference might be seen in comparing these two phrases:  you are the human; you are human.  The first phrase, “You are the human,” indicates a particular person.  It’s true, in English, to say, “You are a human” is possible, meaning that you are one among several, or as distinguished from them, but in NT Greek, you can’t say that.  To them, “You are human” would mean that you have the characteristics of a human, as opposed, say, to fish or birds.  And, no, we are not animals, although that’s another post.

What John is saying is that, whatever characteristics God has, the Word has.  He is God, not “a god.”

But these same folks again, persistent, aren’t they, will say, “Yes, but Jesus Himself said that the Father is greater that He is, John 14:28.  According to them, this means that He isn’t equal with God.  He isn’t Jehovah God.

When the Word became flesh, He laid aside His divine prerogatives, His “rights,” and came to this earth as a human being.  And He was truly human, not a phantom or apparition, as some teach.  In doing so, He did not cease to be God.  He just quit acting like it, for the most part.  Walking on water isn’t ordinarily a human thing.  When He comes back, He will act like it.

As a man and as a Jew, He was born under the Law, Galatians 4:4, and was as responsible to obey it as any other Jew.  In this way, because He was truly human, the Father was greater than He.  This doesn’t deny His deity at all, but merely affirms His humanity.

Further, He didn’t come to glory and fame.  He wasn’t born in Rome to a wealthy or noble family, but in Bethlehem, to a poor family from a despised race.  How do we know His family was poor?  When His mother, Mary, made the required offering after His birth, she offered turtledoves or pigeons, the offering prescribed for the poorest Jew, Luke 2:24; Leviticus 12:8.

He made Himself of no reputation, Philippians 2:7.

But more than all that, and the reason for it, He became a sin offering, Hebrews 9:26, but now, once at the end of the ages, He has appeared to put away sin by the sacrifice of Himself.

Then there’s 2 Corinthians 5:21, For He [God] has made Him [Jesus] who knew no sin to be sin for us, that we might become the righteousness of God in Him.  I don’t even begin to understand all that’s involved in that.  I don’t think we ever will.

But the cross and the tomb weren’t the end of it.

This was the message of the apostolic church, And with great power the apostles gave witness to the resurrection of the Lord Jesus, Acts 4:33.  It’s what they were supposed to preach:  Then He [Jesus] said to them, “Thus it is written, and thus it was necessary for the Christ to suffer and to rise from the dead the third day, and that repentance and remission of sins should be preached in His name to all nations,” Luke 24:46, 47, emphases added.

Why go through all this “doctrine”?  Why emphasize it?  Because if that isn’t who Christ was to Smyrna, they had no hope.  They were suffering for nothing.  And if that isn’t Christ to us, we have no hope.   Indeed, as Paul put it, If in this life only we have hope in Christ, we are of all men most pitiable, 1 Corinthians 15:19.

2 thoughts on “Revelation 2:8, The Christ Who Was Dead And Is Alive.”

This site uses Akismet to reduce spam. Learn how your comment data is processed.